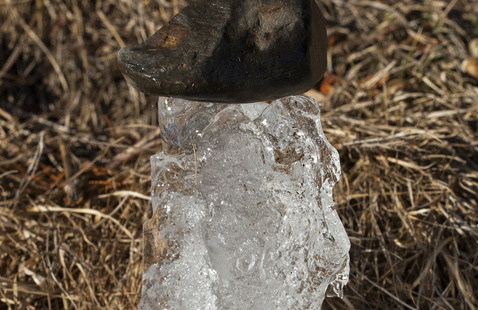 How many photographs and videos have you already seen today? Chances are, more than you think! Engage with our panelists as they explore what was, is, and might be in this image-heavy world.

Great artists and scholars teach in MassArt's Professional and Continuing Education Program. Think Thursdays is a monthly series of conversations about current and future practice in disciplines of art and design with CE faculty, alumni and friends. See professional presentations and delve into issues and trends in the worlds of art and design while getting to know MassArt and the CE community.

Darren Cole (b.1985 Kansas City, MO) is an artist based in Boston. His practice explores race, gender, and the effect technology and art has on the volatility of secondary communities. Currently, Cole is an assistant professor in MassArt's Film/Video department, the resident filmmaker at Urbano Project, producer at Nostos Film Productions, and resident artist at SkyDeck TV. Multi-media re-imagined as a vehicle for change is how Cole creates the meaning of culture through his use of old and new technology.

Tatyana Bronstein is an award-winning filmmaker who directs and produces films that portray the daily lives of people; tell compelling, important stories; break stereotypes; and present new opportunities. Among her films are the documentary "Prima" (2013), shown at the Dance on Camera Festival (co-presented with the Film Society of Lincoln Center) and Voarte InShadow International Festival of Video, Performance and Technology, Lisbon, Portugal, among others. She is a recipient of a 2016 Cambridge Arts Grant for her project “Make Me Dance”, a new feature length cinema-verite documentary that takes an in depth look inside one of the most prestigious dance schools in the US, The Boston Conservatory. Tatyana has an MFA in Media Art and a Master's degree in Visual Arts from Emerson College. She teaches at MassArt and Boston University.

Chelsea Polk is a multimedia artist and musician specializing in photography, video, sound installation, and cello performance. She is currently pursuing an MFA from Massachusetts College of Art and Design in photography. Prior to this, she exhibited her work in numerous shows in and around Cleveland, Ohio, while working in commercial photography. Her most recent projects include Everything Converges into Nothingness, a three-part video and audio series commenting on the rise of the intersection of art and science by exploring the hydrology of local Massachusetts reservoirs, and 44,320, a collaborative project researching peatland conservation in central Ireland. In her free time, she plays cello with the New England Philharmonic and enjoys backpacking.

Rebecca Morrison is a Boston-based multimedia artist whose practice incorporates photography, video, and installation. She has worked for more than a decade as a commercial photographer, freelance editor, and photographic educator for students of all ages, and has taught photography and video courses at New England College in New Hampshire, Boston Public Schools Summer Programs, and The Massachusetts College of Art. Her photographs and video work have been exhibited and screened at venues including MassArt’s Bakalar and Paine Galleries, PhotoPlace Gallery (Middlebury, VT), Black Box Gallery (Portland, Oregon), the 2016 Boston Biennial at Atlantic Works Gallery, Chester Gallery (Henniker, NH), Boston Convention and Exhibition Center’s Art on The Marquee (an 80-foot-tall multi-screen LED marquee featuring public video art on the Boston waterfront), and Hiroshima City Museum of Contemporary Art (Hiroshima, Japan), among others. She holds a BFA in Photography and Art History and an MFA in Film & Video from the Massachusetts College of Art & Design, where she was a recipient of the Abelardo Morell Thesis Prize for Photography, the Boston Art Dealers’ Association Stephen D. Paine Award, and the Pace Graduate Scholarship. In 2018 she was named one of Six Talented Art School Grads to Watch by The Boston Globe.