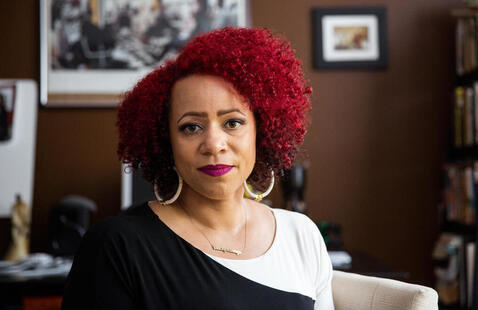 The MassArt Art Museum is excited to announce a free virtual talk by esteemed journalist Nikole Hannah-Jones.  Hannah-Jones’ discussion will examine slavery’s enduring modern legacy and the reframing of the Black American experience. Hannah-Jones is the Pulitzer Prize-winning creator of the 1619 Project and a staff writer at The New York Times Magazine. She has spent her career investigating racial inequality and injustice, and her reporting has earned her the MacArthur Fellowship, known as the Genius grant, a Peabody Award, two George Polk Awards and the National Magazine Award three times. She also serves as the Knight Chair of Race and Journalism at Howard University, where she is founding the Center for Journalism & Democracy.

This lecture is held in conjunction with the MassArt Art Museum exhibition Joana Vasconcelos: Valkyrie Mumbet which honors Elizabeth “Mumbet” Freeman, an enslaved woman whose court battle for her freedom in 1781 helped make slavery illegal in Massachusetts.