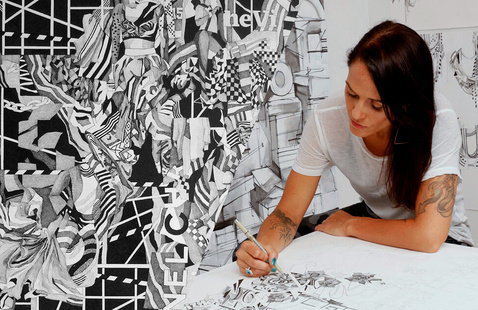 Stephanie Costello is a Brooklyn-based artist specializing in drawing and painting. Her artwork is inspired by the urban environment--by the play between structure and movement; the cycle of construction and reconstruction; and the ways one navigates complicated spaces. She has shown her work in galleries and museums in the U.S and abroad, including The Bronx Museum, Pierogi Gallery in New York and Italy, and La Pan Gallery in Barcelona. She creates large scale public projects, including a basketball court mural with NBA player Taj Gibson and Project Backboard at the Ingersoll Houses in Brooklyn, and a functioning basketball court and mural at Phillips Auction House in New York. She received a BA from DePaul University, a post-baccalaureate from Brandeis University, and an MFA from Massachusetts College of Art and Design.

Stephanie Costello joins the the 2D and 3D Fine Arts departments, the Graduate Programs, and the MassArt community on Wednesday, November 17 at 12pm EST via Zoom.